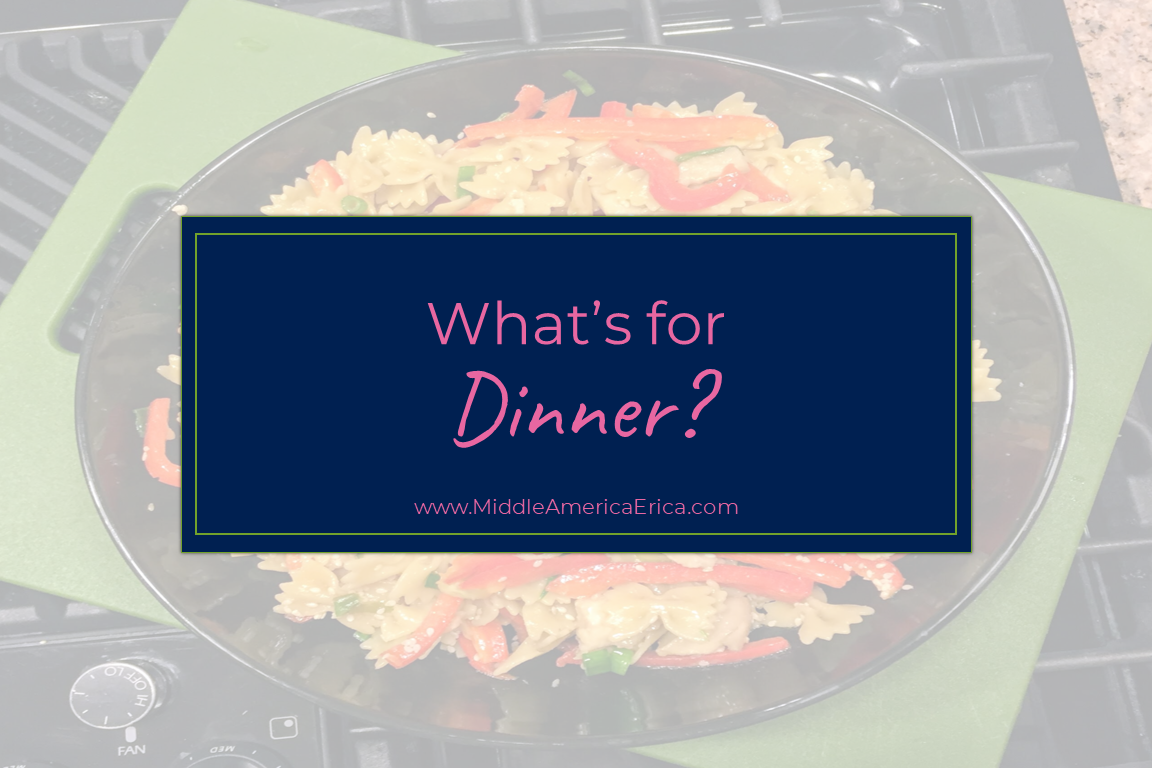 Do you wonder what a dietitian feeds her family of six? Each Wednesday I post what our family ate for dinner during the past week. The meal planning happens on Mondays, then I order groceries on Monday night or Tuesday morning. If you’re curious, here’s what we ate last week.

Tonight was the birthday meal for #1 and he selected cheese pizza and sausage pizza from Roberto’s (a local pizza place), fresh strawberries and dirt pie. The boys made the dirt pie on Tuesday after school and were quite a team getting it all together. 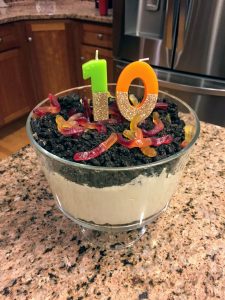 This pasta was a hit! Easy to make good flavor and a welcomed change from Italian sauces with pasta. It had a nice mix of protein, carb and veggies making a complete meal all on its own.

In addition to oranges we also had grapes because #1 does not eat oranges. I’ve tried many times and at this point, I now recognize there are some foods kids just don’t prefer. Part of me wonders if he has a slight allergy to oranges because he has never liked them. It turns out, I also have foods I don’t prefer so at some point, I just had to let it go.

I was intrigued by this recipe. We eat plenty of mac and cheese and this kind of ended up being a mix of spaghetti and meatballs with mac and cheese. You still make the sauce with a butter and flour base (called a roux, pronounced roo), and then marinara sauce is added in.

The kids had a babysitter for the evening so I made dinner before she arrived and it was a simple meal. B and I went to our friend’s 40th birthday party and a fun night out eating grown up food.

For my birthday, I decided we’d order sushi for dinner. We have a local place we like that delivers. #1 and #2 are sushi eaters, #3 likes the avocado and just pulls off the seaweed and rice. Little Miss loved the rice and had some avocado and cucumber. Some of my favorite rolls are the Dragon Roll and the Rainbow Roll.

Since my friends are so nice, they surprised me with a birthday cake at the party on Saturday night – salted caramel. B and the kids sang to me again and we had cake and leftover cupcakes for dessert.

So the chicken was chicken thighs and the fall veggies were butternut squash and Brussels sprouts. Both were made in skillets on the stove top. Typically I roast veggies so it was a different technique for me. I would have to say it’s a little more hands on time to do them on the stove versus roasting in the oven. They did turn out crispier and tastier in my opinion.

All four of the kids liked the chicken, which I suspect has to do with the fact that it had bacon sprinkled on top of it. Well, now that I think of it, Little Miss didn’t actually have bacon on hers. The bacon was supposed to be incorporated into the chicken and veggies but I don’t actually like bacon (shocker, I know) so I left it on the side so the kids could sprinkle it on as they wished. #3 just ate the chopped bacon as he would any side dish and was instantly policed by #1 and #2 that he was taking too much and that’s not how you’re supposed to eat it. A little bit of me suspects that’s how they wanted to eat it too!

It’s a mixed house when it comes to Brussels sprouts – #1 likes them, #2 didn’t think he liked them until he tried them again tonight and actually does like them, #3 tried them and still doesn’t like them, and Little Miss gobbled them up. All 4 still like butternut squash so that was an easy win.

There was still leftover birthday cake, so anyone who wanted had a slice of it for dessert.

Still sticking with the Mexican theme for Tuesdays. I’m a huge fan of sweet potatoes so this was a great add to the menu for the week. So it turns out this meal was only okay. The recipe called for frozen sweet potato cubes and it turns out the package I got had really huge cubes. It made cooking take longer and they didn’t crisp up well. Next time, I’ll just buy a sweet potato and cube it into bite sized pieces myself. I like the cubes to be much closer in size to the corn kernels and black beans. All of the kids thought it was fine.

My sister was in town from California and she had a great suggestion – just make it in the slow cooker. This would turn it into more of a mash/refried bean consistency and let the flavors marinate.

There you have it – our week in review. Which one would you be most likely to try? Would it be helpful to have links to these recipes?