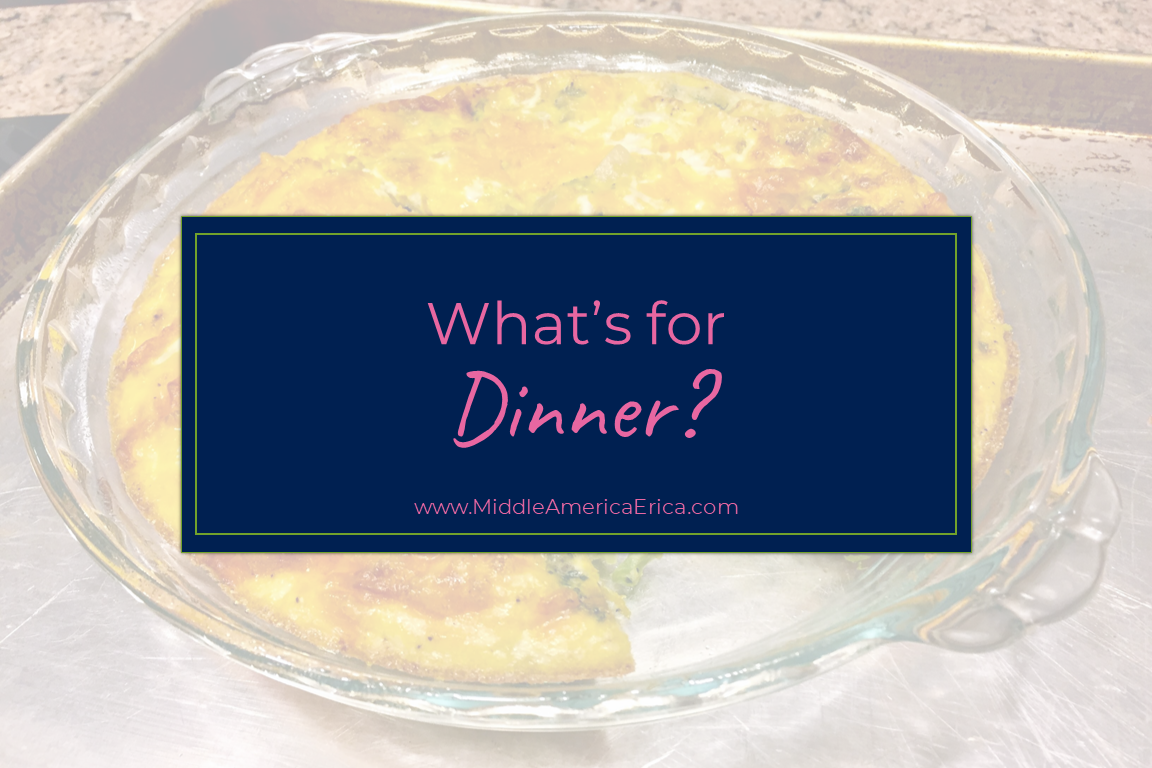 Each Wednesday I post what our family ate for the past week. The meal planning happens on Mondays, then I order groceries on Monday night or Tuesday morning. If you’re curious, here’s what we ate last week.

This is a family favorite that I found sometime in 2018. B, #1, #2, and I all love this. Little Miss ate the chicken and the peppers. #3 said he didn’t like it and got up and served himself Saltines with the grapes and cucumbers.

For dessert the boys had donut holes that were leftover from the morning. The annual book fair is going on at the boys school and one drop in time is “Donuts and Dads” where they have the fair open before school and serve donuts. The mornings are too chaotic for us, so B usually picks up donuts for the kids to eat at home on that morning. So because of that, there were leftovers.

I was surprised by how easy this version of Veggie Lasagna was to make. The vegetables were roasted and then layered with noodles, cheese, and sauce. The recipe called for “oven-ready” noodles which means you don’t have to boil them before using. When the dish came out, the noodles inside the lasagna were a bit chewy and the noodles on the top layer were hard and crunchy. One solution would be to lower the baking temp from 400 degrees to 350 degrees and bake it for longer. Another option would be to use regular noodles and boil them first.

B and #2 thought the lasagna was okay. #3 insisted he didn’t like it, Little Miss ate earlier because she was starving, and #1 and I had a mom/son outing for his baseball team so #1 didn’t try it and I ate it later in the evening. I’ll definitely make it again but with the noodle or temperature changes.

Pretty tasty. #1 liked it a little bit, #2 liked it once he tried it and #3 “did not prefer it” after giving it a try. B and I enjoy Chinese food and the kids haven’t developed a taste for it yet so it could be the limited exposure as to why this meal wasn’t a huge it for the kiddos. #3 mainly ate rice and oranges for dinner. I always like to point out what the 4-year-old (#3) is eating as a reminder that preschoolers are usually pretty carb heavy and will slowly come around if you continue to offer a variety of foods.

Saturday evening we started watching a movie around 5 pm so it was awesome that heating up leftovers was the only meal prep.  With all the leftovers around, guess what all three boys requested? Oatmeal. Yes, oatmeal. I was bewildered too. I mean, they do like oatmeal, but funny that was what they wanted reheated. I had made a big batch on Friday morning thinking I’d eat it over the course of the next few days. Guess they were looking for something hardy to stick to their bones.

#1 asked if he could have the leftovers for lunch the next day; it’s that good! B would prefer it with fewer onions but everyone else gobbled it up.

Frozen pizza is always a hit at our place. Monday nights usually call for something easy. The apple-cheddar salad is a favorite of mine from Super Healthy Kids. It’s colorful mix of sweet, crunchy, and juicy. The kids pick out their favorite parts of the salad but there’s a good variety so I know they are still getting some kind of fruit or veggie out of it. I kept the dressing on the side because let’s face it the kids prefer Ranch or Dorothy Lynch dressing over any homemade one.

These were so, so very easy to put together. I assumed the peppers and onions would be cooked ahead of time, but they just get mixed up and added to the tortillas making the prep super quick. I was surprised by how the pumpkin flavor wasn’t noticeable. It basically just made the enchilada sauce thicker and milder, which is great for kids (and those with sensitive palates). All of the kids ate it. #3 only liked the inside mixture of chicken and peppers and said he “did not prefer” the tortillas and cheese. I found that ironic since he has a tortilla almost every day for lunch. B had a massage so he hasn’t tried the dish yet. From ease of preparation and kid approval, this will be on our Fall/Winter Faves going forward.

Any of these meals sound tasty to you? Drop me a line erica@MiddleAmericaErica.com and I’ll send you the recipe to try with your family.