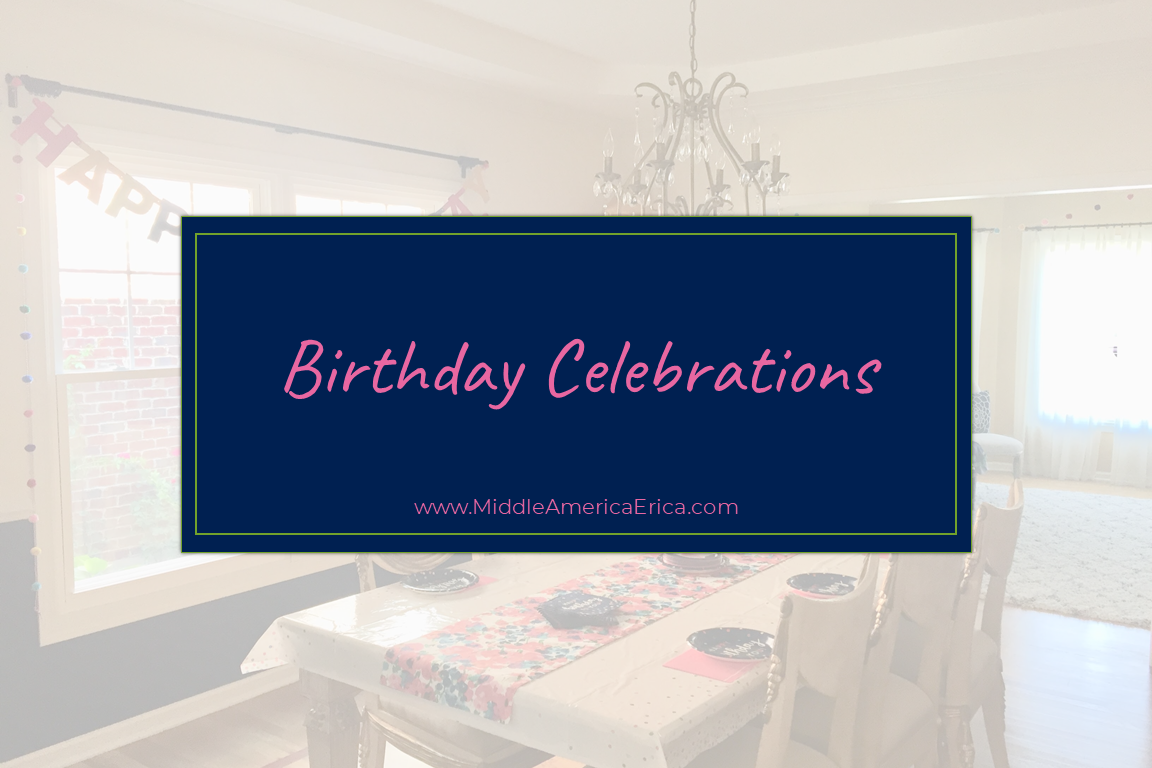 Around here we’re in birthday season. The four kids have birthdays in August, September, October and November. Thankfully each kid has their own month! We try to make it special for each one, and as time has progressed it seems we’re developing some favorite traditions.

1st Birthday – it has evolved from a vegan cake because of course the baby wouldn’t have dairy or eggs before he turned one! And now it’s a smash cupcake loaded with sugar and color. For a present we gift the one-year-old with a pottery barn kids oversized anywhere chair.

Date night – on the day of the month each child was born (i.e., if they were born on the 2nd of January, every 2nd of the month is their date night), the child gets to choose dinner and have an hour of time with only mom and dad. The other kids get to read in mom and dad’s bed while date night is happening. It starts when you turn 4 and recently remembered only lasts 15-30 minutes at that age. As the kids get older it turns into an hour every month. And although it may not seem like much time, it’s reassuring to know you have one on one time schedule for each kid. It probably doesn’t need to be stated but we do a lot of one-on-one time during the day, but it’s more dependent on the flow of the day and what each kid needs on any particular day.  Here’s the full post on Kid’s Date Nights.

Scavenger Hunts – A few Christmases ago the boys were gifted with a treasure chest which contained amazing clues that we could then hide around the house. They have a great time reading the clues, deciphering them, and then running all over the house searching for the next clue. We’ve adapted this to birthdays so no matter what else is going on that day, you get to do a scavenger hunt. Sometimes it’s a fun activity in the winter when the clues are on each of the three floors of the house. I try to make sure each clue goes to a different floor than the previous one so there’s plenty of running up and down the stairs. Here are samples from the 4 year old Paw Patrol themed one we did at my in-laws house:

You’re needed on a rescue mission with Ryder and your favorite pup team.  Find the next clue in the room where you get squeaky clean.

Sky has taken to the sky to help you with the mission!  This pup’s gotta fly to the next clue hidden in the coldest part of the kitchen.

Green means go and Rocky is ready to help with the rescue, too!  Where he puts the trash out is where you’ll find the next clue.

Now Chase is on the case to help uphold the laws.  Find the next clue where your grandparents would wash their paws.

It’s Rubble on the Double to finish the rescue!  Let’s dig for the final clue where clothes are washed and dried up nice and new.

Marshall’s fired up and ready for the birthday clue!  Where suitcases get put away is the place his paws will lead you.

Pinterest is my best friend for finding ideas. I try to tweak the hunt based on what is the kid’s favorite thing (Paw Patrol, Legos, Sports, etc.). The best part is that this becomes part of the birthday celebration and is an activity where it doesn’t really matter what is at the end of the hunt. The older boys get at least a dozen clues and the younger ones only have a handful.

What I Am Excited About Now –

I’m excited we’re heading to my parents’ for the long weekend and other chance to see a fall pumpkin festival!