The older three kids had an extra long weekend, due to teacher meetings on Thursday and Friday, and Columbus Day on Monday. Thursday we spent in town with a trip to the library, haircuts and pictures in the afternoon. Check out this post to read my thoughts on family pictures. In the evening we watched Survivor with the boys. B and I have been watching the show for years. Last year the older boys started watching it with us, so now we record it and watch it on Friday nights. At the beginning of this season, the four of us did a Survivor Draft and the winner gets to plan a family fun day over winter break.

Friday I got up at 5:00 am so I could row before getting ready, nursing Little Miss, and finishing packing for our trip to my parent’s home in northeast Iowa. It’s a 5-6 hour drive depending on how many stops are needed along the way. The goal was to be on the road by 7 which happily we were on the road by 7:15 am. Not bad for a family with 4 kids under 10. We got to my parents for lunch and spent the afternoon playing board games and then the boys painted pumpkins with grandma during E’s nap. The boys were still painting when she woke up, so we went for a little walk using the Ergo carrier. The temperature had dropped quite a bit so I wanted to be able to snuggle with her to keep both of us warm!

Friday night B and I headed to Toppling Goliath Brewery Co. I’ve had the beer before, but not actually been to the brewery. It seemed fairly busy, had a live band and tasty beers. I went with the Mornin’ Delight 2018, which is a maple flavored stout and Rover Truck, an oatmeal stout. Although they’re known for their IPAs, I don’t actually prefer IPAs – too hoppy. 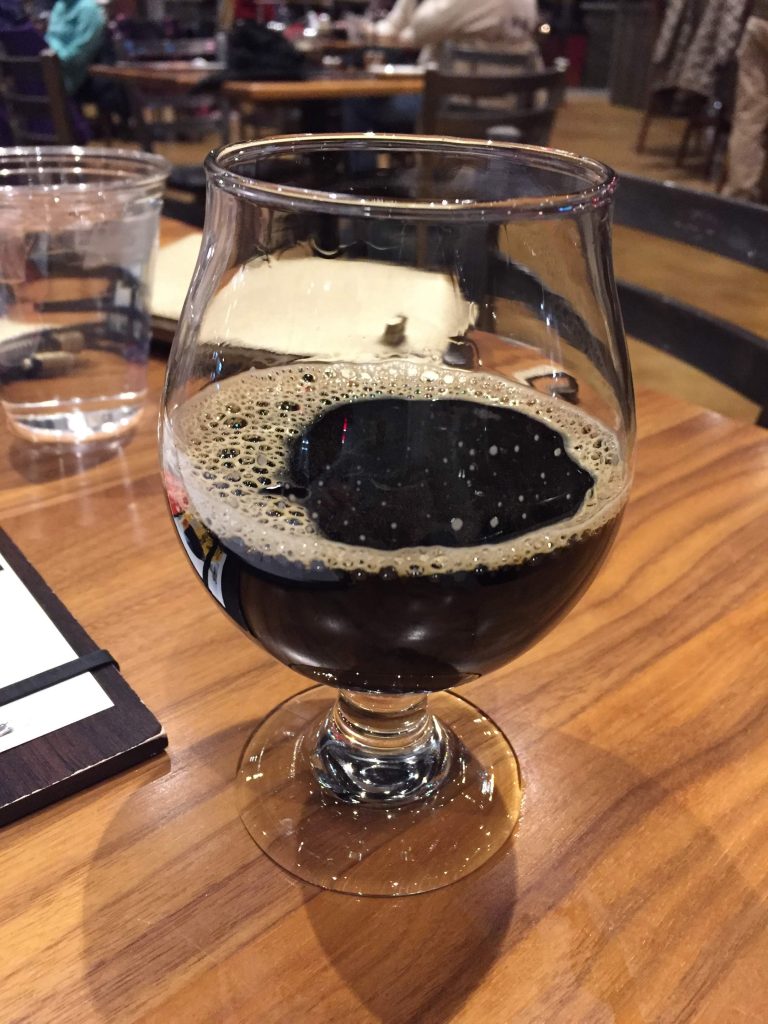 Saturday morning I slept in and B got up with Little Miss. For exercise, I walked on the treadmill, then late morning along with the boys and my parents we headed to Pinter’s Famous Fall Pumpkin Patch for their Pumpkin Play Area. B stayed home with Little Miss because it was cold and windy. Cold like 30 degree cold! So many fun activities – slides, corn maze, corn box (think sandbox with kernels of corn instead of sand), ball throwing, pumpkin cannons, tether ball, barrel rolling, trampoline floor, pedal race cars, bumper cars, and they used to have a haunted house, and it was replaced by indoor mini golf.

Came home for a leisurely afternoon, I read while S napped. After quiet time, we watched a movie, Toy Story 4. The boys had already watched the movie on Friday night when we were at TG. Overall, the Toy Story series has been done well and I appreciate all of the lessons on inclusiveness. It’s one I don’t mind my kids watching over and over again. After a lovely dinner made by my mom, turkey, mashed potatoes, roasted veggies and salad, the Notre Dame football game was on. It was much closer than B liked and thankfully they beat USC.

Sunday we were up early to go to 7:30 am mass. The three boys are great at mass, Little Miss is antsy and vocal so B and I take turns letting her roam in the back of church. We came home, had brunch, played some more games (Blokus, Tall Bird, Short Bird, Mancala). Then it was time to pack up and hit the road. Panera was for dinner (X’s choice since it’s his date night and we could order and pick it up on the way home) and then since we’re behind on Survivor, we watched another episode. Then we had time with X for his monthly date night. There’s usually quite a range between the boys – playing LEGOs, building spy gear, making books, playing games. It’s fun to see what each boy chooses for his activity.

What I Am Excited About Now –

My sister is visiting from California, she used to live near by so it’s fun to catch up when she’s here. Also, I’m working through training for my direct sales business and I’m excited to implement what I learn.