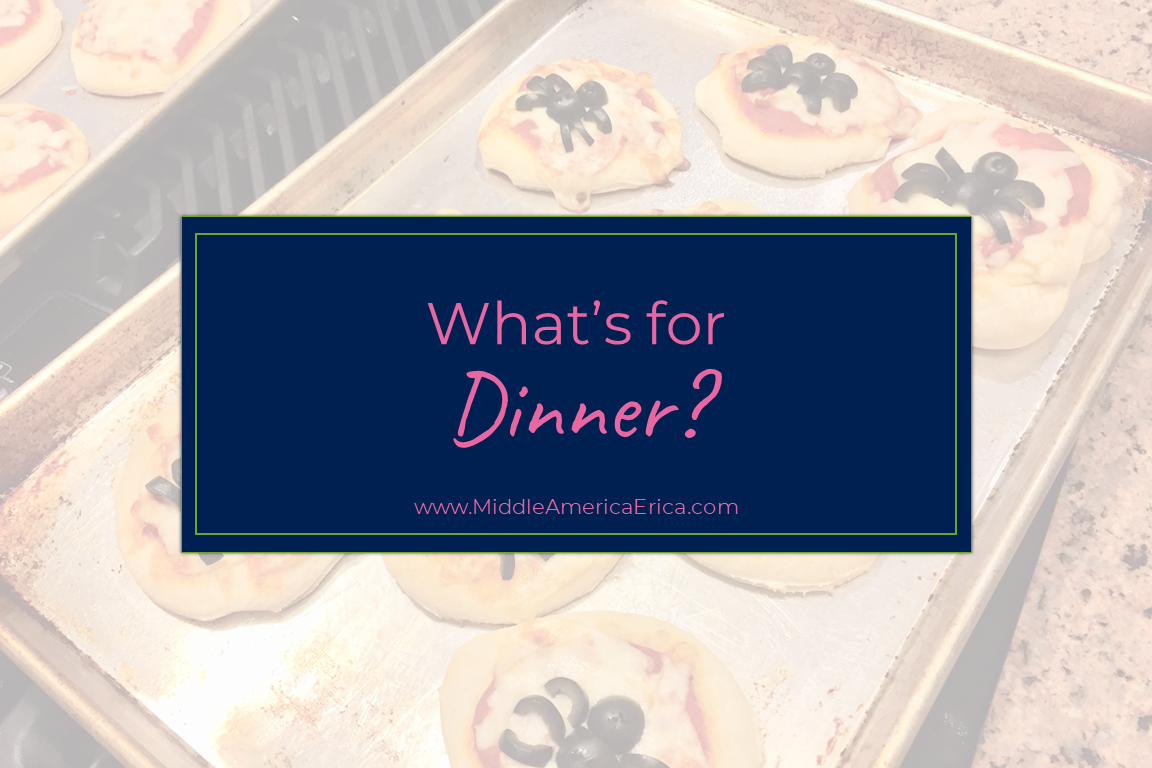 Tuesday’s are usually the Mexican themed night however since I had already purchased these ingredients, I shifted it to Wednesday night. This meal was a welcomed variation from our Taco Tuesdays. It was basically stacked hardshell tacos. Thumbs up from #1 and #2. #3 just ate the tostadas and dumped the rest of the filling out. Little Miss just ate the filling since the tostado was too crunchy to serve to her.

For Halloween, I like to do something fun with dinner. In our town trick or treating goes from 3:30-7:30. I knew we’d need something that was easy enough to make while answering the door and while kids were in and out of the house. It was a crazy cold and snowy Halloween this year, so it #3 only went trick or treating to 3 houses. He helped get the pizzas ready and laughed that there were spiders on them.

B took #1, #2 and went out to dinner at a local restaurant called HB Jones with their friends. I took #3 and Little Miss to a friend’s house where we had chili and pumpkin bread.

B isn’t a fan of dill, so I omitted it from the shrimp dish. The “creamy” part of the shrimp sauce ended up pretty runny. #1 thought it tasted pretty good. #2 and #3 didn’t try it (I kind of think they are getting sick and coming down with something because both of their appetites have been low the past day or so). #3 pretty much dined on rolls and butter which is very typical for 4 year-olds. Little Miss liked the corn tots and roll; she thought the potatoes were okay. It was good practice for eating with utensils.

Side note – I had the shrimp for lunch on Tuesday and it was delicious! Once the flavors had more time to marinate, I think it helped.

So it turns out #2 and #3 were getting sick because I took them to the doctor today and they both have strep throat. They took super long naps in the afternoon, so it was fairly easy to cook dinner with just Little Miss playing around. #1 was focused on a school project and working in the office. I decided to save the frozen pizza for another time and knew that I still had the ingredients from the planned meal for Saturday.

Little Miss could not get enough of this meal. Served it with cantaloupe and a Bacon Caesar Salad kit. The boys all wish they could have the packet of bacon to themselves, but they are getting better about making sure everyone gets a little. Most people would probably sprinkle the packet over the whole salad. However, I’m one of those weirdos who doesn’t actually like bacon. So I prefer serving it where everyone can put it one the side.

And there you have it – our week of meals. Comment below and let me know what meals are working for your family right now.